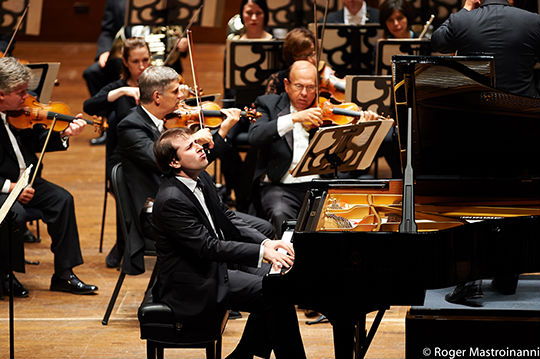 Stanislav Khristenko’s performances have captivated audiences on four continents since his first solo recital at the age of eleven. A ‘poet’, ‘an architect of great forms’ (LeSoir), Mr. Khristenko has been praised in the media around the globe. The Washington Post wrote “it was clear that Khristenko knows how to spin a story; his pacing was mature and unhurried, the dynamic range wide, and his fingers exhibited power and sensitivity.” Of his Weill Hall at Carnegie Hall solo recital The New York Concert Review wrote “[he] has the poise and intellect of a seasoned performer.”

Following Mr. Khristenko’s performance of Brahms’ Piano Concerto No. 1 with The Cleveland Orchestra in the final round of the Cleveland Competition, the Plain Dealer’s Zachary Lewis praised his performance for its “shimmering filigree and phrases of exquisite tenderness, in which every note mattered.”

Born in Ukraine, Mr. Khristenko is a graduate of the Moscow State Tchaikovsky Conservatory. He received an Artist Diploma from the Cleveland Institute of Music in 2010 where he studied as a full scholarship student with Sergei Babayan.