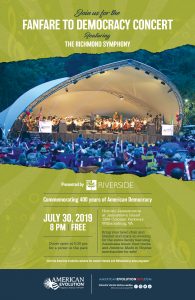 During the month of July, join us in the birthplace of American democracy – America’s Historic Triangle. American Evolution is organizing the 400th Anniversary of the First Representative Legislative Assembly in the Western Hemisphere, which was held in the summer of 1619 in Jamestown, Virginia.

From the New World