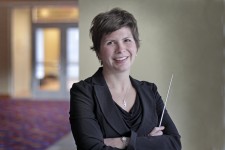 Amy Birdsong is the director of bands at Hanover High School. She is an alumnus of Thomas Dale High School in Chesterfield County and attended James Madison University’s School of Music as a Music Education major. She graduated Magna Cum Laude, with a Bachelor of Music and a minor in Jazz Studies. In 2008, Birdsong received a Masters degree in Music Education from Virginia Commonwealth University. Birdsong is a member of the Commonwealth Winds, a group she helped manage when they were asked to perform for the VMEA conference in 2007. She has also been a guest conductor for middle school honor bands in Central Virginia. In addition to performing, Birdsong likes to run in her spare time, completing full and half marathons throughout Virginia on multiple occasions. Birdsong resides in Hanover County with her husband Steve, sons Jack and Finn, and dogs Coltrane and Maggie.