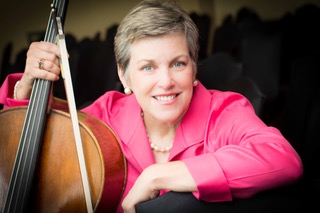 Barbara Gaden has been a member of the cello section of the Richmond Symphony since 1993. A native of New York, she received a Bachelor of Music degree from the Juilliard School where she was a scholarship student of then New York Philharmonic principal cellist, Lorne Munroe. During college, she received a fellowship to attend the Berkshire Music Center at Tanglewood, where she worked with Leonard Bernstein, Seiji Ozawa, Gunther Schuller and others.  Following graduation, Ms. Gaden worked in the classical music business, including a year as Director of Public Relations for the Louisville Orchestra and five years running her own concert management firm in New York City, the last three while also attending Fordham University School of Law.  Since moving to Virginia in 1983 to practice law, she has also been heard in occasional solo performances, including recitals at Richmond Centerstage’s Gottwald Playhouse, the University of Richmond’s Perkinson Recital Hall and Chrysler Museum in Norfolk.  In recent years, she has participated in “pro/amateur” chamber music festivals at the Manhattan School of Music and the Cooperstown (NY) Summer Music Festival.

Appointed to the bench of the Richmond General District Court in 2001, Judge Gaden retired in July 2017 as a full time judge of the Court. She served two years as Chief Judge of the Court and continues to sit as a substitute judge in area courts. Named one of the “Influential Women of Virginia” for 2012 by Virginia Lawyer’s Weekly, she was the first female President of the Association of District Court Judges, a service organization representing the nearly 300 active and retired district court judges of the Commonwealth. She has served as Honorary Chair of the Richmond Bench-Bar Conference, as a faculty member of the Virginia State Bar’s Carrico Professionalism Course and the Virginia CLE Trial Advocacy School in Charlottesville, and is a frequent speaker at legal conferences, particularly those with an emphasis on training young lawyers, professionalism and general district court practice.  Prior to joining the bench, Judge Gaden had a wide-ranging litigation practice, both in the private sector and as an Assistant Attorney General for Virginia.

Ms. Gaden recently began learning tennis and enjoys photography, raising bonsai, and needlework arts. She and her dog participate in agility and nose work classes and, as members of Caring Canines, make visits to various facilities to provide emotional support to people in need.