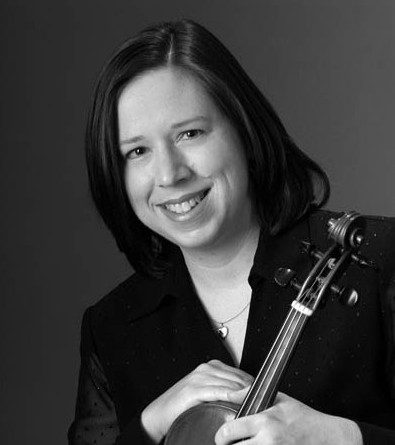 Violinist Catherine Cary is a full-time section violinist for the Richmond Symphony Orchestra, having joined in 1994.  Upon winning the audition, she was appointed to 3rd chair of the 1st violin section.  Throughout her tenure with the Symphony, she has performed as acting Concertmaster, as well as assistant Concertmaster for 1 ½ seasons.  Before moving to Virginia, Catherine was a free-lance violinist in the Pennsylvania and New Jersey region.  She had won positions in the Northeastern Pennsylvania Philharmonic, the Harrisburg Symphony and the Opera Company of Philadelphia.   Ms. Cary has held positions in the Ashlawn Highland Summer Opera Festival in Charlottesville, and for six summers was a member of the Glimmerglass Opera Orchestra. Cathy is a member of the Richmond Chamber Players and also performs in the Williamsburg Symphony.  Throughout her orchestral career, Cathy has performed under conductors Luis Biava, Rossen Milanov, Alan Gilbert, Stephen Mercurio, George Manahan, Stewart Robinson, Maximiano Valdez, Gerard Schwarz, Joanne Faletta, Marin Alsop, Jahja Ling and Valentina Peleggi.  Catherine has been the featured artist, along with her husband, cellist Neal Cary, in performances of the Brahms Double Concerto with the Richmond Philharmonic, performances of Vivaldi Concerto for Violin and Cello in B-flat major RV 547, Gliere Eight Duos, Kodaly Duo and Passacaglia by Handel-Halvorsen. Ms. Cary currently serves on the faculty of the Eastern Music Festival in Greensboro, NC.  Recent performances at EMF include chamber performances with the English violin soloist, Tasmin Little, performances with violinist Nadja Salerno-Sonnenberg, and the Shostakovich Piano Trio with Neal Cary and pianist Gideon Rubin.   The following is from a review of the Beethoven Piano Trio Op. 70, at EMF in 2009:  “Cary’s violin playing was first-rate.  Intonation and timbre were right on, and she provided both impassioned and gentle lyricism.”  (Tim Lindeman)

Catherine studied violin from age 5, with Suzuki violin method instructor, Julian Meyer, at the Settlement Music School (PA).   She was born into a very musical family; her father played bassoon and mother played cello. From age 9 to 17, she studied violin with Wolfgang Richter.  At age 17, Catherine toured throughout England and Scotland with the Philadelphia Youth Orchestra, Joseph Primavera music director, including concerts in London, York and Edinburgh.  As a student at the Philadelphia College of Performing Arts, Ms. Cary studied with William dePasquale, former assistant concertmaster of the Philadelphia Orchestra.  Ms. Cary studied for several years with Yumi Ninomiya Scott of the Philadelphia Orchestra, receiving a Bachelor’s of Music in Violin Performance at Temple University.  While serving as concertmaster of the Temple University Orchestra, she was featured in a video of Strauss’ Don Juan.  Ms. Cary gained a great deal of orchestral experience to complement her college studies, by performing for four seasons as principal second violin with the Haddonfield Symphony (now the Symphony in C), under the direction of Alan Gilbert.

Currently, Ms. Cary is an instructor of private violin lessons, and on occasion, coaches the members of the Richmond Symphony Youth Orchestra, at the Richmond Symphony School of Music.  At EMF, Ms. Cary teaches aspiring young performers private lessons, and coaches young artist chamber music ensembles. Catherine has over 20 years of teaching experience, and has been an instructor of violin at Temple University’s Music Prep Program, the Hartwick College Music Festival (Oneonta, NY) and at St. Catherine’s School, Richmond, VA.  For more information on violin lessons, please visit rsomusicians.com.

Ms. Cary’s violin was made in 1925 in Turin by Luigi Azzola. Her bow was made by John Norwood Lee, Chicago, IL.