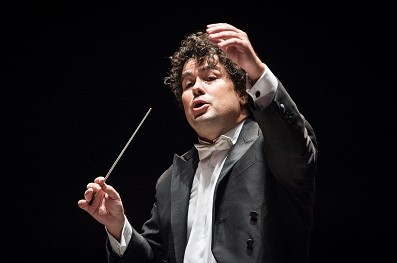 “Heralded as “a musician of real depth, sensitivity, and authority” Danail Rachev is Music Director and Conductor of the Eugene Symphony. Since beginning his tenure there in 2009, Mr. Rachev’s visionary leadership is building on the Symphony’s 50-year tradition of artistic excellence in the core repertory while increasing its commitment to music of today. He is credited with commissioning five works over the last six years, and is recognized for broadening the orchestra’s audiences through creative and innovative programming, as well as for increasing community engagement and education opportunities for the region.

Under Mr. Rachev, the Eugene Symphony launched its first-ever free summer concert reaching a capacity crowd of over 5,000, including many Symphony newcomers. Now in its sixth year, Symphony in the Park has become a beloved summer tradition highlighting emerging local talent in the region, with a performance at Eugene’s Cuthbert Amphitheater and popular run-outs to Roseburg and Cottage Grove. Counterpoint, a dynamic, NEA-funded, interdisciplinary festival marrying thematic orchestral programming with complementary events throughout Eugene, has also succeeded in building new audiences for the Symphony and strengthening relationships with esteemed partners like the University of Oregon and Oregon Shakespeare Festival. Looking ahead, Mr. Rachev has envisioned a global cultural journey onstage and off for the Eugene Symphony’s upcoming 50th Anniversary Season, including three world premieres as well as collaborations with Yo-Yo Ma and André Watts.

Worldwide, Mr. Rachev has returned to conduct the Philharmonia Orchestra and Scottish Chamber Orchestra, and appeared with the Royal Scottish National Orchestra, SWR Stuttgart Radio Symphony, Yomiuri Nippon Symphony Orchestra, Auckland Philharmonia, Orquesta Sinfónica del Principado de Asturias, Orquesta Nacional do Porto, and the New Zealand Symphony Orchestra, which he led on tour in Summer 2013. Rachev has also led concerts with leading orchestras in the United States, including the Philadelphia Orchestra, and the symphonies of Baltimore, Nashville, and Grand Rapids, as well as the Fort Wayne Philharmonic and others.

Mr. Rachev launched his professional career as Assistant Conductor of the Philadelphia Orchestra (2008-2010) and the Dallas Symphony (2005-2008), leading and programming numerous public concerts and educational programs. Of his Dallas Symphony subscription series debut, the Dallas Morning News wrote: “One of the Dallas Symphony Orchestra’s best concerts of the past year…from start to finish, assistant conductor Danail Rachev got the music unfailingly right, and made it viscerally compelling.”

Mr. Rachev has often enjoyed working with young musicians, serving as conductor of the Juilliard Pre-College Symphony from 2002 to 2005 and guest conducting the Brevard Music Center Orchestra and Sinfonia and Colorado’s National Repertory Orchestra. He also has a passion for opera, leading performances of Donizetti’s Don Pasquale and Rossini’s Il Barbiere di Siviglia at the Russe State Opera in his native Bulgaria, conducting performances of Copland’s The Tender Land with Baltimore’s Opera Vivente, and serving on the faculty of the Russian Opera Workshop in Philadelphia.

Rachev was born in Shumen, Bulgaria and trained at the State Musical Academy in Sofia, where he received degrees in orchestral and choral conducting. Granted a full scholarship, he moved to the United States to continue his studies at the Peabody Conservatory of Music. Rachev was a conducting fellow at the American Academy of Conducting in Aspen and a participant in the League of American Orchestras’ National Conducting Institute, which led to his debut with the National Symphony in Washington, D.C. The first-ever conducting fellow of the New World Symphony, he studied with Michael Tilson Thomas and worked alongside him on many occasions. Other mentors have included Gustav Meier, Vassil Kazandjiev, David Zinman, and Leonard Slatkin.

When not in Eugene, Mr. Rachev and his wife, arts administrator and soprano Elizabeth Racheva, reside in Philadelphia with their two young daughters, Kalina Louise and Neviana Jean.