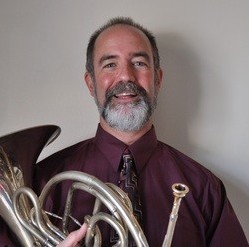 Roger serves as the director of Eternity Music Academy and stays active in his church community. He is the manager of the Hampton Horn Quartet, and enjoys being a freelance musician, clinician, adjudicator, and educator in the Richmond and Hampton Roads Metro areas. He had the privilege of playing several extra roles in Steven Spielberg’s Lincoln, and has recently acted in movies for the National Geographic Channel, AMC, CBN, and PBS. In his spare time, he loves to travel with his wife and spend time outdoors.