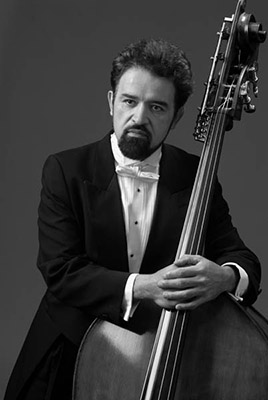 Rumano Solano, Assistant Principal Bass of the Richmond Symphony, is a native of Costa Rica and came to the U. S. under the auspices of the Organization of American States. He is a graduate of the Curtis Institute of Music and the Peabody Conservatory, and studied with Roger Scott, Julius Levine, and Harold Robinson. Rumano has performed with the Philadelphia Orchestra, Baltimore Symphony, and Atlanta Symphony, and participated in the Aspen and Chautauqua Music Festivals. He served as Principal Bass for ten years at the Pierre Monteux Festival for Conductors and Orchestra Players. He has also performed with members of the Marlboro Chamber Players at Carnegie Hall and the Kennedy Center. Rumano is a master luthier and bass-maker, having trained at the Cremona School of Violin Making. His double basses are played in major orchestras throughout the U. S., Canada, Australia, Japan, and Europe.