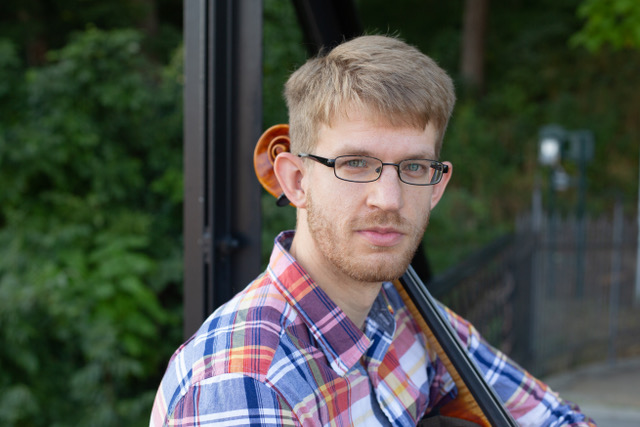 Cellist Schuyler Slack has performed in orchestral, chamber music, and recital settings across the United
States, Canada, Europe, and Japan.  The Alexandria, VA native was appointed to the Richmond
Symphony’s Kenneth and Bettie Christopher Perry Foundation Cello Chair in 2016.  Previously he held
the joint position of Artist in Residence at the University of Evansville and Principal Cellist of the
Evansville Philharmonic Orchestra.  He is also a member of the Des Moines Metro Opera Orchestra,
Williamsburg Symphony, and is on the music faculty at Randolph-Macon College.  He performs
frequently in the cello sections of major orchestras such as the Cleveland Orchestra and the Baltimore and National Symphonies.  His primary teachers were Cleveland Orchestra principal cellists Mark Kosower and Stephen Geber at the Cleveland Institute of Music.

A devoted chamber musician and lover of string quartets, Schuyler has studied with and performed
alongside members of the Tokyo, Orford, Cleveland, Brentano, Guarneri and Juilliard Quartets, Alban
Gerhardt, Nadia Sirota, and Donald and Vivian Weilerstein.  He has performed on some of the world’s
biggest stages, including Carnegie Hall’s Stern Auditorium, Tokyo’s Suntory Hall, and the Kennedy
Center Concert Hall; as well as given recitals at some of the countries top music schools, such as the
Eastman School of Music and the University of Michigan.

In 2017 he was granted artist sponsorship by the Virginia Commission for the Arts to perform recitals alongside pianist Ieva Jokubaviciute. Equally committed to the music of living composers and crossover musical endeavors, Schuyler has commissioned new compositions for the cello by composers Douglas Boyce and Steven Snowden. He was praised by the Washington Post for his “excellent” contribution – noted for his “pluck and scrape effects!” – to a new music-theatre adaptation of Kafka’s Metamorphosis that was taken to the Prague Fringe Festival in 2015.

Schuyler Slack joined the Richmond Symphony in 2016. He is featured in the Symphony’s Musician Spotlight for the January and February 2017 Playbill, excerpted below.

Where did you grow up?

I grew up in Alexandria, VA.  For the first part of my life, my dad was a Foreign Service Officer and I lived much of it in Asia, including being born in Korea.

Where did you work before the Richmond Symphony?
I was Principal Cellist of the Evansville Philharmonic Orchestra and Artist in Residence at the University of Evansville in Indiana.

Tell us about your musical influences:
I fell for the cello when I was three years old and saw Yo-Yo Ma perform on Mr. Rogers’ Neighborhood.  I remember being completely mesmerized and having dreams of doing something similar.  My first opportunity to play a cello came in fourth grade in the public school strings program.  I started taking private lessons a year later and from that point knew that I wanted to spend my life playing the cello.  Had it not been for music in the schools when I was a child, I probably wouldn’t have started the cello and certainly would not be here today.

Most inspiring composers?
I love many composers for many reasons, but whenever I’m lucky enough to play a piece by Brahms it always feels like I’ve come home.

What is your most memorable moment with the Richmond Symphony?
I will remember performing with Itzhak Perlman forever.  That’s not just a memorable RSO moment, that’s a memorable life moment.  The way he shifted and pulled the sound in the slow movement of his concerto sounded like maple syrup!  I’ve been inspired to try to recreate that sort of sound in my own playing ever since.

If you could play another instrument, what would it be?
French Horn.  Along with the cello, I don’t think there’s another instrument that can sound so heroic in one moment and so delicate in the next.  Some of my favorite moments in symphonic music are horn solos and I’m always excited when I get to hear our own Principal Horn, Jay, do what he does best.

Where is the coolest place you’ve ever performed?
I’ve been lucky to play in a lot of weird and unusual places.  One of my favorite memories was performing for a week at the Prague Fringe Festival in 2015.  I was an onstage character in an adaptation of Franz Kafka’s Metamorphosis that channeled the emotions of the main character, Gregor, and expressed them through the cello.  I got to improvise a lot of bug sounds, fighting sounds, death sounds, and crying sounds, as well as incorporate a lot of great cello music into the play.  And I got to do it in the city where the story was written!