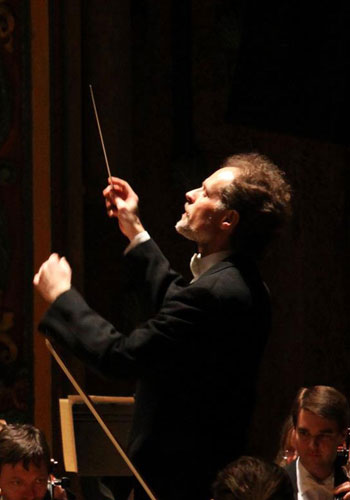 During his tenure, the Richmond Symphony has significantly expanded its repertoire and broadened public engagement, while also enjoying increased ticket sales and enthusiastic critical acclaim. In addition, the Richmond Symphony has recently received special recognition from the National Endowment for the Arts and the Virginia Commission for the Arts for its innovative programs, including the major initiative of the ‘Big Tent’ which has made possible free outdoor concerts and a new level of collaboration with the Richmond community.

From 1997 to 2003, Steven Smith served as the Assistant Conductor of The Cleveland Orchestra where he appeared on the subscription series at Severance Hall and Blossom Music Center. With a strong commitment to arts education, he assisted in the planning and conducting of The Cleveland Orchestra’s educational and family concerts and hosted the orchestra’s annual broadcast videoconference which won an Emmy Award in 2001. For five seasons, he also served as Music Director of the Cleveland Orchestra Youth Orchestra which performed by invitation at Carnegie Hall in 2001. From 2002–05, he was associate professor at Oberlin Conservatory, where he led both orchestral and opera performances.

During his time in Richmond, Steven Smith has been delighted to collaborate with other performing groups in the region, including the Richmond Ballet’s 30th anniversary celebration in 2014, and the Virginia Opera’s production of Mozart’s Le nozze di Figaro in 2013. He has appeared as guest conductor with orchestras such as San Francisco, Milwaukee, Houston, Detroit, Tulsa, Jacksonville, Puerto Rico Symphony, and the Aspen Music Festival. Abroad, he has performed with the Hong Kong Philharmonic, New Zealand’s Auckland Philharmonia Orchestra, National Taiwan Symphony Orchestra, and Mexico’s Orquesta Sinfónica de Xalapa. In addition, he has conducted numerous opera and orchestral performances at Indiana University, the Cleveland Institute of Music, and Brevard Music Center.

Steven Smith is an ASCAP award-winning composer, with commissions from The Cleveland Orchestra, Cleveland Orchestra Youth Orchestra, Grand Rapids Symphony, Eugene Youth Symphony, and solo artists. His works have been performed throughout the United States and in Europe. He was named Ohio Composer of the Year for 2008.

A native of Toledo, Ohio, Steven Smith earned Master’s degrees from the Eastman School of Music and the Cleveland Institute of Music. He is the recipient of the CIM Alumni Association 1999 Alumni Achievement Award and the Geraldine C. and Emory M. Ford Foundation’s Conductor Career Development Grant.