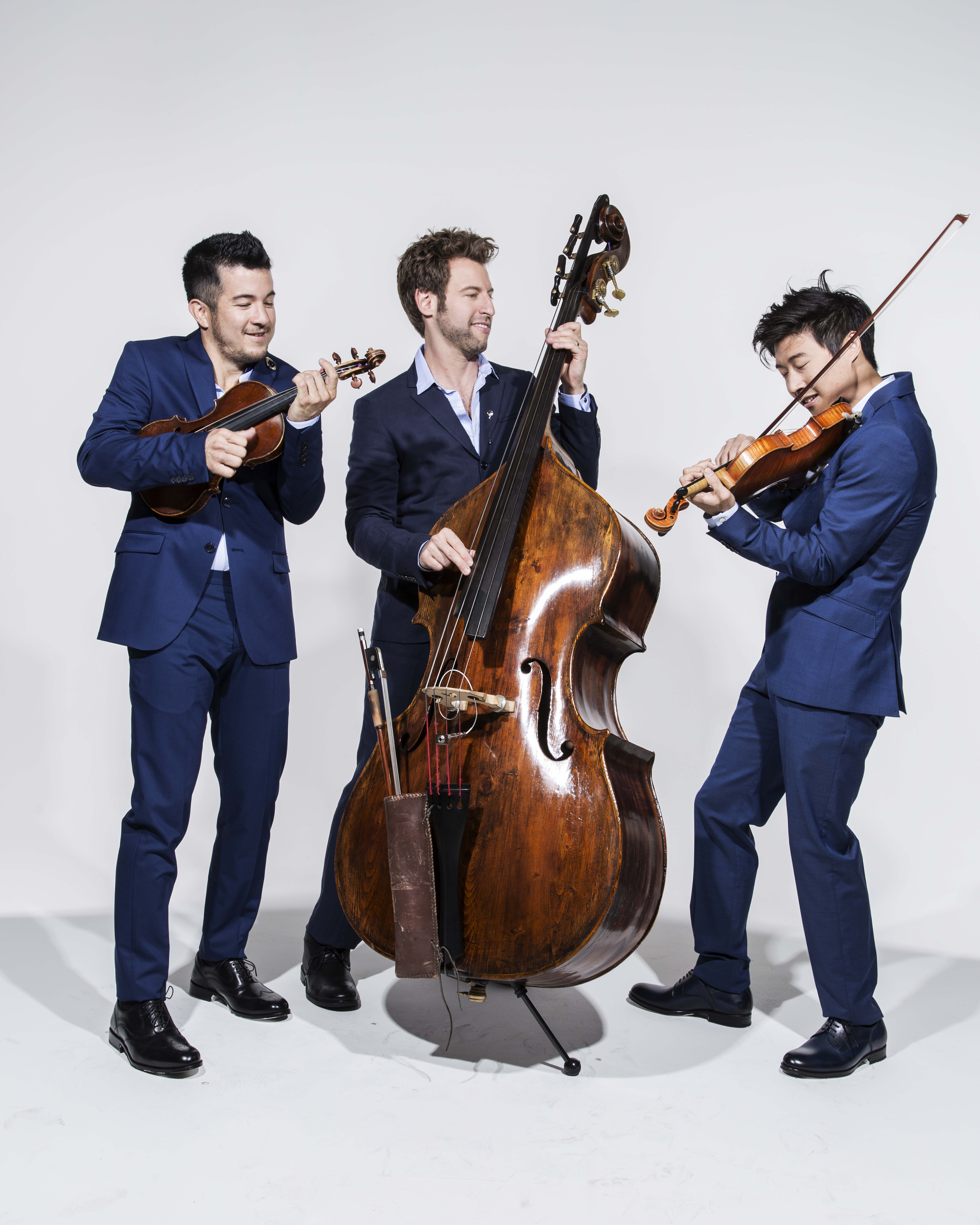 The groundbreaking, category-shattering trio Time for Three (Tf3) transcends traditional classification, with elements of classical, country western, gypsy and jazz idioms forming a blend all its own. The members — Nicolas (Nick) Kendall, violin; Charles Yang violin; and Ranaan Meyer, double bass — carry a passion for improvisation, composing and arranging, all prime elements of the ensemble’s playing.

To date, the group has performed hundreds of engagements as diverse as its music: from featured guest soloists on the Philadelphia Orchestra’s subscription series to Club Yoshi’s in San Francisco to residencies at the Kennedy Center to Christoph Eschenbach’s birthday concert at the Schleswig-Holstein Festival in Germany. Recent highlights included their Carnegie Hall debut, appearances with the Boston Pops, Melbourne Symphony Orchestra, a sell-out concert at the 2014 BBC Proms, and an appearance on the ABC prime time hit show “Dancing with the Stars.”

Tf3’s high-energy performances are free of conventional practices, drawing instead from the members’ differing musical backgrounds. The trio also performs its own arrangements of traditional repertoire and Ranaan Meyer provides original compositions to complement the trio’s offerings.

In 2014 Time for Three released their debut Universal Music Classics album, Time for Three, which spent seven consecutive weeks in the Top 10 of Billboard’s Classical Crossover Chart. The ensemble has also embarked on a major commissioning programs to expand its unique repertoire for symphony orchestras including Concerto 4-3, written by Pulitzer-Prize winning composer Jennifer Higdon, Travels in Time for Three by Chris Brubeck in 2010, co-commissioned by the Boston Pops, the Youngstown Symphony, and eight other orchestras, and Games and Challenges by William Bolcom, commissioned by the Indianapolis Symphony. Their latest project, a three-year residency with the Sun Valley Summer Symphony, includes commissions for three new works.  Time for Three premiered the first of these works, Elevation: Paradise, in Sun Valley in August, 2015 and the second, Free Souls, in July, 2016.

To date, the group has performed hundreds of engagements, from sell-out concerts at the 2014 BBC Proms, to Christoph Eschenbach’s birthday concert to residencies at the Kennedy Center and Sun Valley Summer Symphony to name a few. TV performances include appearing on ABC’s ‘Dancing with The Stars’, and an Emmy-winning show “Time for Three in Concert” premiered by PBS. The ensemble are currently travelling throughout Europe as a highlight act of the 2016 NOTP (Night of The Proms) tour.