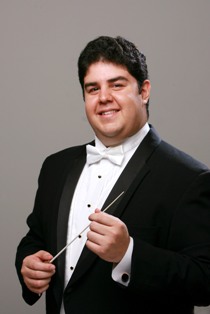 Recently appointed Music Director of The Phoenix Symphony, Tito Muñoz is increasingly recognized as one of the most gifted and versatile conductors of his generation. He previously served as Music Director of the Opéra National de Lorraine and the Orchestre symphonique et lyrique de Nancy in France. Prior appointments include Assistant Conductor positions with The Cleveland Orchestra, Cincinnati Symphony Orchestra, Cincinnati Chamber Orchestra and the Aspen Music Festival.

Committed to working with young artists, Mr. Muñoz has conducted performances at the Aspen Music Festival, Boston University Tanglewood Institute, Cleveland Institute of Music, Indiana University, Kent/Blossom Music Festival, Music Academy of the West, New England Conservatory, New World Symphony, Oberlin Conservatory and the Royal Conservatory of Music in Toronto, as well as a nine-city tour with the St. Olaf College Orchestra. Additionally, he has had ongoing relationships with the Cleveland Orchestra Youth Orchestra and the Portland (OR) Youth Philharmonic, leading rehearsals and masterclasses. He has also led conducting classes at the American Academy of Conducting at Aspen, Cleveland Institute of Music and Indiana University.

During the summers of 2004 through 2006, Mr. Muñoz attended the American Academy of Conducting at Aspen where he studied with David Zinman and Murry Sidlin and participated in masterclasses with Asher Fisch, Leon Fleisher, George Manahan, David Robertson, and Leonard Slatkin. He is the winner of the Aspen Music Festival’s 2005 Robert J. Harth Conductor Prize and the 2006 Aspen Conducting Prize, returning to Aspen as the festival’s Assistant Conductor in the summer of 2007, and later as a guest conductor. He made his professional conducting debut in 2006 with the National Symphony Orchestra at the Kennedy Center, invited by Leonard Slatkin as a participant of the National Conducting Institute. That same year, at the invitation of David Zinman, he made his Cleveland Orchestra debut at the Blossom Music Festival.

An accomplished violinist, Mr. Muñoz began his musical training in the Juilliard School’s Music Advancement Program, continuing studies in violin and composition at the Manhattan School of Music Preparatory Division. He attended Fiorello H. LaGuardia High School of Music & Art and Performing Arts, and participated in the InterSchool Orchestras of New York and New York Youth Symphony. He furthered his training at Queens College (CUNY) as a violin student of Daniel Phillips.